Under The Golden Sun by Jenny Ashcroft 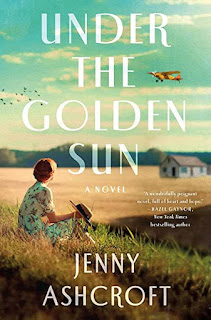 An ad asking for an adult to chaperone a child to Australia sounded interesting to Rose considering her current situation, but how would this work during the war?

Rose answered the ad, visited the home where the sweet child was, and accepted the job.

In the home Rose finds a dying woman, Walter, the child, and information that Walter’s mother was killed by a bus and had family in Australia that were waiting for him.

Rose stays with Walter to get comfortable with him and him with her before they take off on the ocean liner.

The trip was long and arduous as well as having a lot of apprehension for both Rose and Walter.  Rose hoped his new family was going to be kind to Walter...how would she leave this sweet boy with someone who may not fully love him?

Her fears were confirmed when they arrived. They actually were not expected nor were they welcome, it was pouring down rain, and they had to sleep in the barn that night because they weren’t let into the house. Vivian must have lied to her, but why? What now?

Well…Rose finds out why Vivian wanted Walter to be with this family in Australia.

Walter had inherited a great deal of money and has a complicated situation with his background and with being in Australia.

We get to share the sorrows of the situation, the joys, and also the beautiful landscape of Australia and its customs.

You will fall in love with Walter and Rose and not want the book to end.

You will also want to visit Australia.

A do not miss read for fans of historical fiction and women’s fiction.  5/5